An East Village Tenement in the Beatdown Mid-’70s

In 1976, Savage Joy author Robert Dunn (Meet the Annas, Stations of the Cross) moved to New York City, scored a $90-a-month East Village apartment, and got hired at The New Yorker magazine. All life-changing good fortune, and the foundation of this novel, Dunn’s most autobiographical yet.

In Savage Joy the narrator, Cole Whitman, straddles his uptown literary world and the budding Lower Manhattan punk scene. When an apartment in his building at 340 East 11th Street opens up, musician Slater Martin moves in, sweeping Cole along into his CBGBs world. Also moving into 340 is Cole’s elegant and mysterious literary editor pal Emily Prosser, whom Cole desires unrequitedly.

Cole needs a girlfriend, Slater needs a new band, Emily needs a new life. Together the three of them, along with a fiery female drummer called Sailor and a dweeby bassist, Wendell Walter, get a new punk group going, named, by Cole, Savage Joy.

What follows among the five of them is both joyful and savage, a feast of love, music, sex, violence, blood, and madness.

First review of Savage Joy is in, from Foreword magazine:

Savage Joy encapsulates an era as it captures searches for meaning and connection.

Cole’s life is dull and solitary, defined by his job in the typing pool at The New Yorker, and his hours spent reading and writing. At his first literary gathering, he meets the gorgeous Emily, a girl he can’t quite pin down. The two become linked to, and divided by, the freewheeling Slater, a punk rocker who is Cole’s neighbor.

Slater’s boundary pushing leads Cole into many adventures, including to Slater’s female bandmate, Sailor, a drummer styled like a 1940s pinup girl. Each of these vividly sketched characters expands Cole’s world, bringing him introspection and world travel. His thoughtful narration, paired with realistic and zingy dialogue, gives the novel depth.

The plot draws from Dunn’s experiences in New York, and the city itself becomes a character here. Scenes are rich in detail, from storefront churches to the gritty and legendary punk bar CBGBs. Dunn shares priceless moments through his characters: hearing the trend-setting Talking Heads, carefully preserved doodles of magazine cartoonists on office walls, and an epic party in a blighted building with rooftop views of Manhattan.

Dunn’s deft writing soars, sharing insights into the lives of young adults who are still defining themselves. Adrift on the city’s vast tide, they grow and evolve, seeking understanding. Dunn masterfully weaves his characters together, hinting at their secrets and forcing engagement as they succeed, flounder, and fail.

Savage Joy encapsulates an era, as well as capturing universal and hopeful searches for meaning and connection. 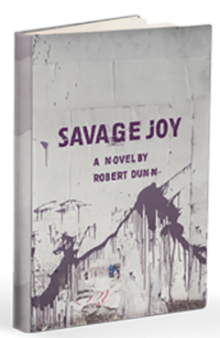