#6 The Spanish Bow by Andromeda Romano-Lax 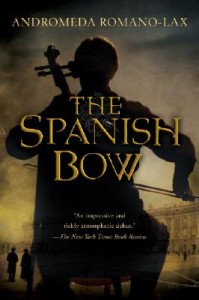 The Spanish Bow (2007) by Andromeda Romano-Lax
A cello prodigy’s great adventures and political intrigue as he travels around the world.

“From the hypocrisies of the courts of Madrid to the terror of Nazi-occupied Paris, Romano-Lax weaves the upheavals of the first half of the twentieth century into an elegy to the simultaneous power and impotency of art, and the contradictions of the human spirit.” – blogger C.W.