A band torn apart by a manipulative manager. A rock star gone missing. An international maelstrom that ranges from the glitz of L.A. to the seedy underbelly of Amsterdam, from the slopes of St. Moritz to the forbidding Scottish Highlands.

Roadie vividly captures all the trials, tribulations, and rites of passage musicians go through as they climb the ladder of success, in the process exposing the cruel realities of life in the fast lane. It was inspired by the true story of Rolling Stones founding member Ian Stewart, who was fired by the group’s first manager because he “didn’t look like a rock star.”

Roadie has its own book site here! More on Howard Massey. To reach Howard directly, go to howard@roadiethebook.com.

“My real life experiences over the past 23 years pale in comparison to the tales contained in Roadie. Howard Massey lets us become the fly on the road case and observe the insanity of touring and the music business in general, with a hilarious and wry point of view. Definitely an all access pass!”        —CJ Vanston, Spinal Tap musical director

“Truth may be stranger than fiction, but fiction allows us to glimpse deeper truths that reality often obscures. That’s the case with Howard Massey’s riveting debut novel, Roadie. Much of it is not pretty, but it’s endlessly fascinating and, quite literally, filled with mystery in this tale of rises, falls, survival, and, against all odds, friendship.        —Anthony DeCurtis, Contributing Editor, Rolling Stone

“Roadie is as searing and informed an indictment of major label greed as I’ve ever read. With sympathetic characters, a plot that kept me engrossed to the final line, and a heartfelt love for rock and roll, Roadie delivers the goods.”        —Lewis Shiner, author of NY Times bestseller Glimpses

If you’ve read the novel, please add your take to Goodreads. Coral Press supports it wholeheartedly. 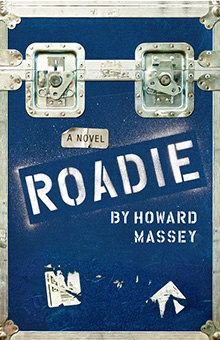