In the early ’60s, the girl group the Annas ruled rock ‘n’ roll. Lead singer Anna Dubower, “the haunted-eyed, raven-haired incarnation of the true church of rock ‘n’ roll,” has two Number 1 hits (including “He’s So Bad, I Love Him”-listen here), an affair with John Lennon, and endless promise. Then comes the British Invasion, and overnight the Annas’ passionate music falls from favor.

In a desperate attempt to reconquer the charts, the Annas and their producer, Punky Solomon, make one last record: Love Will Cut You Like a Knife. The disc flops, but 30 years later it’s all over the movies and TV its highly suspect writing credits intact. Dink Stephenson, songwriter for the Annas, narrates the tale. On a moon-bright New York rooftop in August 1966, Dink proposes to Anna; for reasons never understood, she holds back her answer, and a few months later she’s dead.

Thus unfolds a tale rich in secrets. Part fascinating slice of rock ‘n’ roll history, part legal drama, part cold case mystery, Meet the Annas is a stunning read: a book you won’t be able to put down until all of Anna Dubower’s true, harrowing story is revealed.

The Annas now have their own website—come visit.

CLICK HERE to find out about the author of Meet the Annas, Robert Dunn.

AND PLEASE ENJOY OUR BOOK TRAILER (below) for Meet the Annas, also on our YouTube channel. To hear all of the Annas’ “He’s So Bad (I Love Him)” click to the right.

In Meet the Annas, Robert Dunn has brought the world of ’60s pop to life with the precision and veracity of Nabokov. Every detail is a thing to savor. This is a fully musical work of literature, a book with a beat so good you could almost dance to it. — David Hajdu, author of Positively Fourth Street

A lawsuit over rights to a suddenly popular 1960s ditty fuels a lively rock and roll nostalgia trip in Dunn’s latest “musical novel.” Songwriter Dink Stephenson, his partner, Princess Diamond, and producer, Punky Solomon, engineered the mid-’60s success of New York “bad girl” trio the Annas, fronted by the mega-sexy, beehived and heavily mascara’d Anna Dubower. The Annas score two #1 hits, but their time at the top is cut short by the British Invasion. The band’s fate is sealed when Anna suddenly and mysteriously dies three months after comeback single “Love Will Cut You Like a Knife” flops. Thirty years later, the song is hot on television and movie soundtracks, and narrator Dink sues Punky and one of Punky’s shady associates over song rights. As the lawsuit progresses, Dink, who carried a giant torch for Anna back in the day, investigates Anna’s death and turns up a few surprises. Dunn (Pink Cadillac; Soul Cavalcade) writes great entertainment. Fans of towering beehives and classic hip-swaying, harmony-driven pop will definitely want to take a look. — Publishers Weekly 2/12/07

Dunn mixes his passion for the era’s girl groups and their music with a keen eye for detail that brings this dark tale to life. If you liked Dreamgirls, you’ll love Meet the Annas.”  —Jim Fusilli, award-winning author of Hard, Hard City

The book I’m raving about is Meet The Annas by Robert Dunn.  As most people would suspect, I’m a HUGE fan of the sixties Girl Group sound, and all the great hits that came from the Brill Building era of the early sixties. Robert Dunn has created a truly terrific book filled with nostalgia and suspense in his roman a clef novel. If you loved the Shangri-Las and the other girl groups; if you love those songs from Carole King and Gerry Goffin and Ellie Greenwich and Jeff Barry, you gotta read this book. Here’s a huge thanks to Robert Dunn for so skillfully catching the mood of that era in his novel. — Nick Poff, author of the Handyman series of novels, from his blog.

The way Anna and the Annas shape and influence Dink’s life—from the moment he meets Anna in his early twenties through the lawsuit and events shortly after when he is in his fifties—make this a story of unrequited love. — Paula Chaffee Scardamalia, Foreword 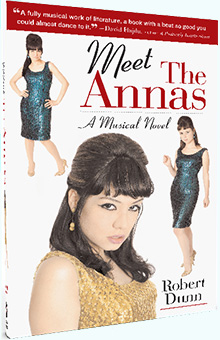