PUNK IS COMING – but it’s not here yet …

It’s the fall of 1976, and 20-year-old guitarist Daniel Travers’s life is a mess. His band, the Killjoys, is essentially going nowhere; the pills he’s popping are making him crazy; and the voices batting around his head have him convinced that he’s a bleedin’ quadropheniac. On top of everything, what he calls the Real Me, his true self, has disappeared-and he’s lost without it.

Then the phone rings, a new agent offering a weeklong gig at the exotic Mai Tai Hotel, in Puente Harbor, Wash. Told by the agent that Jimi Hendrix and Heart started out at the Mai Tai, Daniel sees the weeklong gig as his best chance to get the Killjoys on the road to success-and also to ditch his own troubles.

Getting in Tune is a novel that captures the fire of the rock ‘n’ roll dream as well as the dream that music can transcend chaos, that it can bring perfection to our daily mess. And for Daniel, it’s about finding-as his unlikely guru, The Who’s Pete Townshend, whispers to him-the Universal Chord, the perfect set of notes that blesses life with essential harmony.

A book full of the low grit of small-club rock ‘n’ roll and the high spirit the music soars upon, Getting in Tune is an exciting read. Step in, can you hear it? The band is tuning up right now….

More about the author of Getting in Tune, Roger L. Trott.

This novel from former music critic Trott tells the tale of fictional mid-1970s California rockers the Killjoys, who travel to a rundown hotel in Washington State to chase their dreams of musical superstardom. High school dropout Daniel Travers is a self-confessed Pete Townshend junkie, daydreaming about rock stardom, when he gets a call from a promoter who wants his band to follow in the footsteps of musical legends Jimi Hendrix and Heart by playing the Mai Tai Hotel. Travers’s band mates, including lead singer Mick (no coincidence there) and henpecked bassist Rob, warily agree to the gig. However, they arrive to find the hotel is a Hell’s Angels hangout and an incubator for plenty of alcohol- and drug-related trouble. When the group’s week-long run comes to an end, they are offered an even better gig, but at what cost? — Publishers Weekly

Good gigs and bad gigs, girlfriends and groupies, poseurs and punks: Getting in Tune will ring deliciously true if you’ve been in a band-and deliver a rare glimpse behind the curtain if you’ve ever longed to be. Crank up the volume and enjoy Roger Trott’s wild rock & roll ride. — Kathi Kamen Goldmark, author of And My Shoes Keep Walking Back to You and founder of the Rock Bottom Remainders

I heard the notes of the Universal Chord, the combination of notes uniting us all. — Landon Christensen, The Davis Enterprise

Getting In Tune was great fun to read. The book is a rock ‘n roll romp through the ’70s that has that authentic feel of the period. I enjoyed it thoroughly. Perfect summertime reading. It’s made even better because Trott, the author, is a musician. That comes through. Only someone who has played in rock bands knows how to write about the experience. Perfect.
I want to go on the road and play rock! — Amazon.com 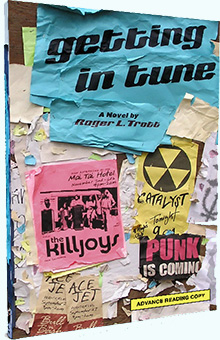